The following tests and measurements was taken on a TAT-1 installed on a 3/4" inch copper pipe.  Measurements were made looking for the peak flux density, the flux density in the center of the pipe which is where the minimum flux density occurs in this design.  Also a six inch steel scale was used to show the alignment of the flux field. 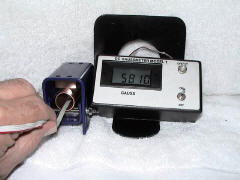